Something that I enjoy sharing at Zuber’s, is an event called “Tea and Tales”.

My daughter and I have always enjoyed finding tea rooms or tea shops to have an afternoon tea.  When we purchased Zuber’s, Jaclyn “suggested” to me that the Wagon Wheel Room would be a perfect place to host an afternoon tea.  As I thought about it, I decided to give it a try.  So I began to research the event of taking tea and began to formulate my ideas as to what I wanted to offer at a tea event.  I came across a magazine called “Tea Time” and I have learned a great deal from reading that magazine.  I discovered that there was a ‘tea’ convention in Kansas City, so my sister-in-law and I went down to that.  It was a great event that helped me continue to ‘blend’ ideas of how I could offer an afternoon tea event.  One thing I learned at that convention was that I could not use loose leaf tea at ‘my’ teas, as we do not have enough room at Zuber’s to carry a variety of teas, and I did not have time to learn how to blend teas, so I decided to find a bagged tea that would go with the three courses I would serve at my afternoon teas.   I had decided that I wanted to serve my teas using china, tea sets, so as Sue and I drove back from Kansas City we stopped at some antique shops and I began to purchase china, tea sets.  I have 5 tables that I use for the teas limiting the number of guests to 20.  I purchased five different tea sets so each table would be set differently.  I collected tea table cloths, napkins, silverware, and teapots!   I decided to call my event “Tea and Tales” because I would offer a three course afternoon tea, and there would always be a local speaker to share ‘tales’ that related to the tea event.  Thus, 5 years ago, I began hosting “Tea and Tales”.  Over the various teas I have hosted, the event has grown and changed.  I host two tea events every year to coincide with weekend events in the Amana Colonies, and when possible,  I have hosted private teas for small groups.

My next “Tea and Tales” is part of ‘Take-A-Bite’ weekend in April.  My tea is going to be on Sunday, April 19th.  If you would like to come for a relaxing afternoon tea, call Zuber’s Homestead Hotel to place your reservation.  On our website is a pull-down item about “Tea and Tales” – have a look to learn more!  Next week I’ll share a little more about “Tea and Tales” and have some pictures of tea cup sets that will be for sale! 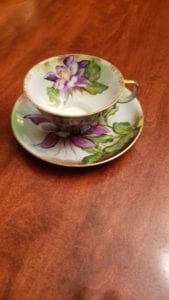