Something I’ve always thought about doing, is writing a children’s book.  I love children’s literature and am drawn to that section of any book store!  I look at a book and think “How could I use that book in class?”  A relatively new type of not only children’s book but also book for adults is the “A,B,C” format.  Some book stores are devoting a ‘section’ to all types of ABC books.

So one slow winter about 2 years ago, I began to jot down some ideas for an ABC book about the Amana Colonies.  I did some checking and I did not find a book of this type already published – so I continued jotting down ideas of what could represent each letter.  Then I decided I wanted to make this a non-fiction book using photographs for the pictures in the book.  A friend of mine whom I taught with in Oskaloosa, Iowa, had written an ABC book about Oskaloosa, so I decided to model mine after hers.    I began to take pictures of people/places/things that would represent the letters in the story.  I also began asking people around the colonies their thoughts on what would be a good representation for each letter – especially some of the harder letters like ‘Q’ and ‘U’.  ‘Z’ of course was a ‘no brainer’ – Zuber’s Homestead Hotel and Bill Zuber!

I wanted some of the pictures to be historic photographs, so I went to the Amana Historical Museum in Amana and Jon and Rebecca were very helpful.  Jon verified my historical text and Rebecca found pictures for me to include.  I also talked with many locals to verify the historical information I was using as text.  I wanted this book to have a ‘then and now’ type feel.  That is the feeling you can get when visiting the colonies – there are historical buildings still being used along side of new businesses.  There are century old homes next to newer ones – in some neighborhoods.  There are friendly people everywhere!

As I wrote in my book – “The Amana Colonies are an amazing blend of modern life and over 300 years of heritage and history, dating back to 1714 Germany.  Throughout the seven villages, visitors see evidence of the history created in this place, side by side with modern-day homes and businesses.  The past woven with the present, preparing for the future.”

My book can be found on Amazon, Barnes and Noble, at our hotel ( of course), and various stores in the Amana Colonies.  It is a book not only for children but also for adults.  It is a ‘read together’ book.  To some people, the Amana Colonies are yet to be discovered while others return here again and again to ‘experience’ the culture, history and heritage of these seven villages.  If you’ve never been to the Amana Colonies – maybe this book will pique your interest enough that you’ll want to come and explore the village 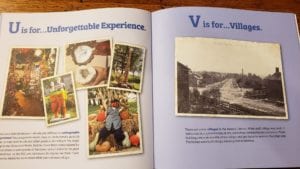 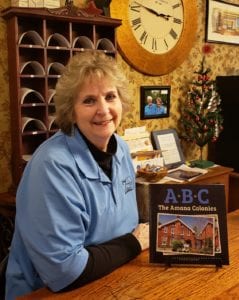